This wiki will continue to evolve with full details of how to use the application.  In the meantime you may find this video useful, from the Trados Spring 2021 virtual conference, as it runs through the overall process:

WIKI describes Transcreation as a concept used in the field of translation studies to describe the process of adapting a message from one language to another, while maintaining its intent, style, tone, and context

WIKI: Back translation is defined as: a procedure whereby a translator (or team of translators) interpret or re-translate a document that was previously translated into another language, back to the original language.

What does the Trados Transcreation App do?

The app allows for users to convert their existing Trados Studio Projects into a Trados Transcreation Project. Transcreated Projects are unique in that they cater for numerus alternative translations as well as back translations, which are often required when adapting this type of material from one language to another.

Workflows supported are both Internal and done within Trados Studio, and/or External, meaning MS Word is the users preferred environment for completing their Transcreated task. 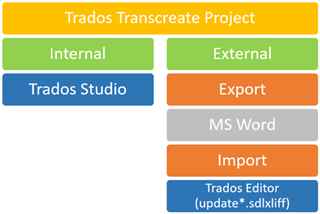 Questions to review before you start: 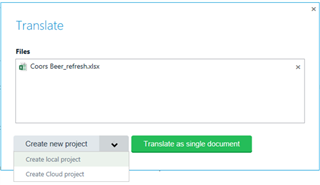 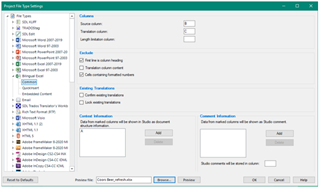 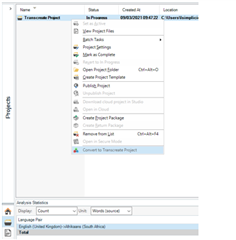 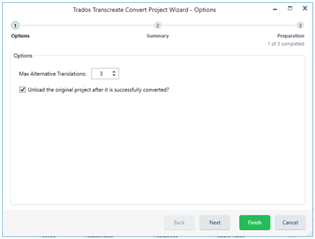 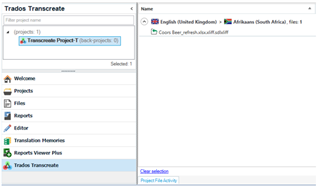 It’s expected that the content in the Editor view will show duplicate segments, which are part of the alternative Transcreations specified during the initial convert process

This is further supported, as seen in the File Tree View through the alternative listings

Take Note: Only the first occurrence of the alternative segments are translated, where possible. All other instances and the translations thereof remain empty. This is as designed in order to ensure each alternative translation is unique and appropriately differentiated as part of the Transcreate process.

As briefly explained above, the External Workflow would consist of both an export to MS Word as well as an import back into Trados Studio for reflect any Transcreated updates to your Project files.

Export options that are managed as part of the export to MS Word include:

Based on export file(s) selections, users can then complete their Transcreated task directly in MS Word.

Take Note: This export did not include the Back Translation

File(s) can be imported as required, in order to:

Import options that are managed as part of the export workflow from MS Word include: 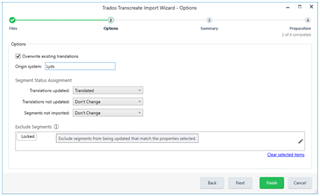 Take Note: Once completed the green import icon is seen against the files

The Trados Transcreate Project is created in the same location path as your original Studio Project.

After the successful completion of the conversation between your original Studio Project and the Trados Transcreated Project, you can use the short cut to explore the folders 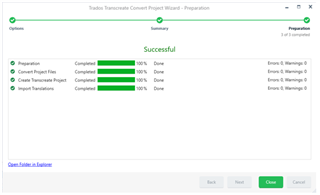 Included in the standard folder structure, you now have a folder called workflow. And in the even you created a Back Translation, you will also see an additional folder called “Back Projects”cccccctjnevgtljfddjtnvvfuntdgrcdngvtvihehicf 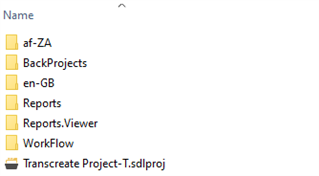 It is worthy to note the following:

However as the local report confirms as the Workflow, this file was managed from within Trados Studio as an Internal Workflow 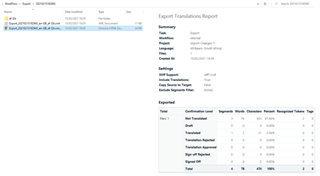 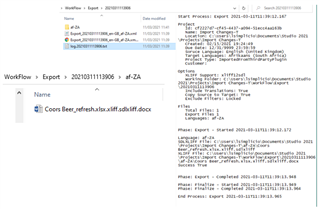 If unsure, a user can review the Project File Activity Audit View for a full understanding of the files export/import history

Take Note: To prevent valuable work from being lost due to ongoing imports and exports while having a mixed Internal / External workflow, the following warning may show 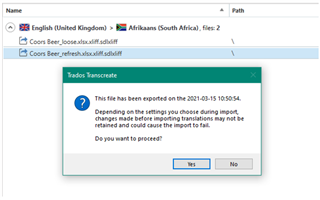 In addition, a warning icon will indicate if a file has already been exported and/or imported and therefore work may be lost if not managed appropriately 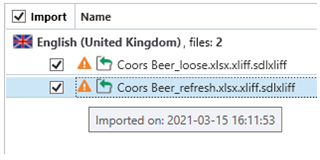 When to accommodate Back Translation

The command to create a Back Translation can only take place from within the Trados Transcreate View. Regardless if you included Back Translation as part of the external export to MS Word or not. 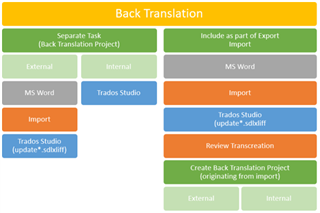 How to create a Focused Back Translation Project 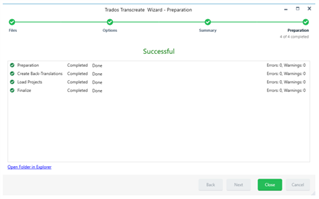 Take Note: Also within Project View in Trados Studio you will find a dedicated Back Translation Project

Take Note: It’s expected that the source and target translation changes direction, to fulfil the Back Translation requirement

Included as part of Transcreate

While it is recommended different users perform the actual Transcreation from the Back Translation, it maybe your requirement that during the External workflow you want to include the Back-Translation. 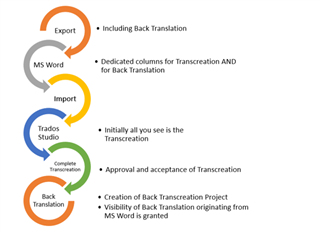 In summary the following results are expected:

To maintain reference of the Transcreation origin, Trados Studio users can update Translation Memories using the *.sdlxliff meta data. During Batch Translation Memory Update it is known as “Use information from bilingual file to update TU system fields” 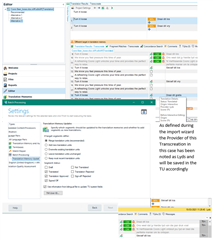 Trados Transcreate App default settings for convert, export and import can be changed by going to the app view’s settings 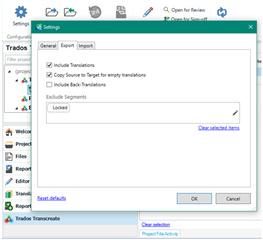 During an import, you have added a file accidently. You can remove it by right clicking and select “Clear XLIFF File”

If in the Trados Transcreate view you cant see your Project listed, its likely because its missing from within the Trados Studio Project View. In which case, simply select “Open Project” to relocate your missing Project from within your windows explorer. 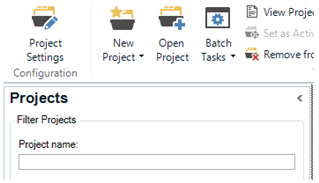 In the event you have several alternative translations to manage, you can easily navigate within Trados Studio by using the Advanced Display Filter 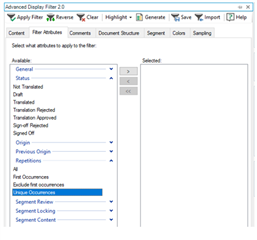 If working as part of the Internal Workflow, your Translation Memory and Termbase maybe great assets to integrated as supporting tools to reference as part of your Transcreate process