The Solution
The Trados Studio Target Renamer solves these problems, and probably others, by providing a new batch task supporting the features you need:

How does it work?

Once the plugin is installed you will find a new batch task in your list: 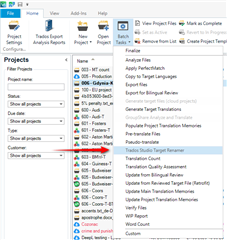 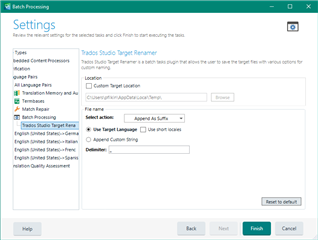 You have three options here:

This will add the language code to the end of the filename, and separated by the "Delimiter" you choose in these options.  For example:

The full language code for German(Germany) was added to the end of the filenames.

This will add the language code to the start of the filename, and separated by the "Delimiter" you choose in these options.  For example:

The full language code for German(Germany) was added to the start of the filenames.

Selecting this option will introduce the necessary input boxes for you to search for the part of the filenames you wish to work with and then replace some of the text with your preferred naming:

Using the same source files as an example:

You need to be careful not to replace the entire name with new text because if you do this you will end up with one target file for each language.  This is because the name of each one will be exactly the same and as they are saved they will overwrite each other.  You also don't want the file names to be the same as you won't be able to tell them apart!

So the way to use this feature is to use back references.  For example, search for:

And replace with this:

This will result in the following:

The numbering is retained as I wanted, and the names are prefixed with REVIEW_.  This does require some basic knowledge of how to work with regular expressions, but if you need help please ask in the appropriate community forum.  To explain this example:

As for the other options the files will be grouped by target language so you can easily manage sending the files in an organised manner.

This option simply allows you to use short or long language codes in the filenames.  For example:

This option allows a simple mechanism to use your own text as a prefix or suffix to the target filenames.  Using this example I should see this:

This option allows you to choose the delimiter, or string of delimiters, that you wish to use to separate the custom string from the filename.

The initial release of this app fails to use the "Append Custom String" feature correctly.  It doesn't work.

The workaround for now is to use the regular expression option where you can achieve the same thing by searching for the full name, storing in a back reference, and replacing with the appropriate text followed by the back reference recall.  For example:

So search for this: